Because there are "no bad seats in the house," artfully concealing mics is essential at Alley's intimate theatres (Photo Credit: John Everett)

Houston, TX — Point Source Audio® (PSA) today released comments by one of its early customers on how the company’s new EMBRACE earmounts performed during multiple production runs throughout a six month period. Sound supervisor Pierre Dupree of Houston’s Alley Theatre, who is no stranger to the world of arts and crafts in theatre mic’ing, recently said Point Source Audio’s patent-pending EMBRACE Earmounts are “worth their weight in gold.” Each of the theatre’s cast of 15 resident actors now have custom mics assigned to them no matter where they go. According to Dupree, this is possible because “EMBRACE is completely customizable, quick to build, durable; and most definitively, our actors love them.”

The Alley Theatre is a Tony Award-winning indoor theatre in Downtown Houston, Texas. In the 2015-2016 Season it boasts more than 500 performances—more performances than all other performing arts organizations in the Houston Theater District combined. The Alley, which opened in 1968 and underwent a $46.5 million building renovation in the 2014-2015 Season, hosts two stages: the “Hubbard Theatre”, the main stage with seating for 774 and the more intimate “Neuhaus Theatre” with seating for 310. Dupree attributed his long-standing mic’ing challenge to there being no bad seat in the house in the intimate setting of the theatres, which means there is a very strong visual component for the audience. The actor mics need to blend away and until EMBRACE, it had been no easy task keeping the actors and the rest of the production team happy. Dupree, who has served at Alley for over nine years, jokingly recounted “numerous fights with the Costume Department” on the best way to conceal the mics.

“We in theatre don’t get products specifically targeted for us so we were immediately captivated by EMBRACE,” said Dupree. “We have been using them now for about six months through four or five productions.” In Alley’s production of A Midsummer Night’s Dream, the actor wears a donkey hat and makes numerous costume changes. 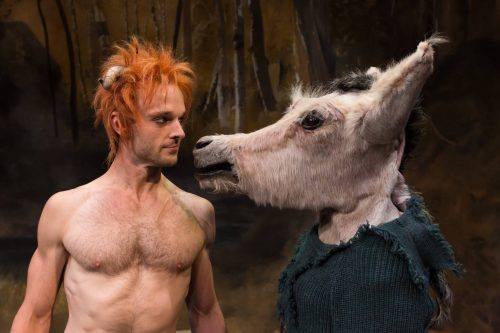 The fact that EMBRACE stayed on the actor through all the fight scenes and choreography impressed Dupree. He lamented the days before EMBRACE, “We tried all the techniques out there to secure and hide the mic: metal earloops, Hellerman sleeves, metal clips, plastic clips…everything!” To do it right, each custom mic would take about 30 minutes to include shaping, sizing, molding, and painting…now it only takes 5 minutes according to Dupree. “We went with the beige color because it was the most versatile color and could easily be custom painted.”

Point Source Audio VP of Marketing Yvonne Ho asserts that EMBRACE’s product strategy and design intent is the best of two worlds, revealing that “On the one hand, you have a very miniature lavalier that’s perfect for concealing—but then it’s comfortable and capable of holding like a headset as a result of its ergonomic design.” The EMBRACE is currently patent-pending.

Alley Theatre is host to a steady stream of events and productions coming into Houston. “The sound designers we work with are increasingly asking for the Point Source Audio brand so we are planning to expand our inventory to accommodate these requests. Dupree summed up his findings from A/B testing Point Source against the top brands, saying “We barely needed to EQ the PSA mics and there is much less bass roll off.”

The Earmounts are custom designed for Point Source Audio microphones with a cable diameter of about 1.5mm, but Dupree found them highly flexible—enough that he has even used them with non-PSA mics that he previously had in inventory. “You can cut them to fit and I love the fact you can mold them to stay with minimal tape,” said Dupree. For actors with no hair, Dupree found EMBRACE to be a more aesthetic solution: “EMBRACE provides us with a method to better secure the microphone that is less clunky and less heavy than past solutions.”

The patent-pending EMBRACE Microphone is a buildable and customizable mic’ing solution new to the audio industry. EMBRACE microphones are engineered for concealing, but its mounting system keeps the mic placement consistent to the mouth as with traditional boom style mics. This innovation in custom mic’ing is the best of lightweight and low-profile lavs combined with the consistent placement of earmounted microphones. EMBRACE’s patent-pending shapeable structure can be trimmed, bent and shaped to a custom-fit for each user. Once the user has configured the Earmount the way they like it and it feels secure on the ear, the mic can be easily “locked” into the Earmount in just mere seconds. The whole process might take about a minute or two the first time, but Point Source asserts that process can take as little as 10 seconds with some experience—replacing a process that used to take 20-30 minutes. More information about Point Source Audio’s various audio solutions can be found by visiting www.point-sourceaudio.com.

About the Alley Theatre
The Alley Theatre is a Tony Award-winning indoor theatre in Downtown Houston, Texas. With more than 500 performances in 2015-2016, the Alley will produce more performances than all other performing arts organizations in the Houston Theater District combined. The Alley Theatre underwent a $46.5 million building renovation in the 2014-2015 Season, the first major improvements since the building opened in 1968. The Alley Resident Company creates a wide-ranging repertoire and innovative productions of classics, neglected modern plays, and premieres. For more information, visit https://www.alleytheatre.org/

About Point Source Audio
Point Source Audio (@PSA_audio) manufactures and distributes worldwide a unique line of live event technology including their patented comm headset; and their SERIES8 miniature microphones, known for their robust bendable boom and waterproof features, and a winner of the 2014 Best Microphone award. As the Digigram Distributor for the Americas, the world renowned brand of Digigram sound cards, and IP audio and IP video networking technology are also available from Point Source Audio. Founded in 2004, Point Source Audio is headquartered in Petaluma, Calif. For more information call (415) 226-1122 or visit www.point-sourceaudio.com. Follow the company on Twitter at www.twitter.com/PSA_audio