The ÷ Tour (pronounced “Divide Tour”) originated in Turin, Italy March 2017 and is the third world concert tour by English singer and songwriter, Ed Sheeran. On its second stop in the U.S. at AT&T Stadium in San Francisco on August 21, 2018, the tour’s lighting director discussed how Point Source Audio became an integral part of the production tech.

Like most of us, Matt Jones only has one set of arms. But he had been operating like he had multiple sets switching frantically between audio and comms for months as the lighting director on the Ed Sheeran Divide Tour. This drove Jones’ discovery and decision to choose the CM-i3 in-ear headset which he says has since “solved all the problems.”

Before adopting the CM-i3 headset for Sheeran’s tour, Jones was wearing just in-ear molds. When he needed to get on comms he would have to take his in-ears out in order to put on a Clear-Com headset. “My hands are tied up running the show so trying to take an [in-ear] out, and put a headset on and talk while still trying to run a show can be a little bit difficult—and you find yourself needing to have an extra two pairs of arms to do everything else you need,” said Jones detailing his challenges before acquiring the CM-i3 headset.

“The [CM-i3] has freed me up to not worry about taking my [in-ears] out and then putting on a different headset; it means that I can keep my headset with my in-ears and still be able to communicate with spots, stage management, and the technicians,” said Jones. It’s improved the workflow so I don’t have to take my attention away from running the show. I can still run the show and just click into the channel.” 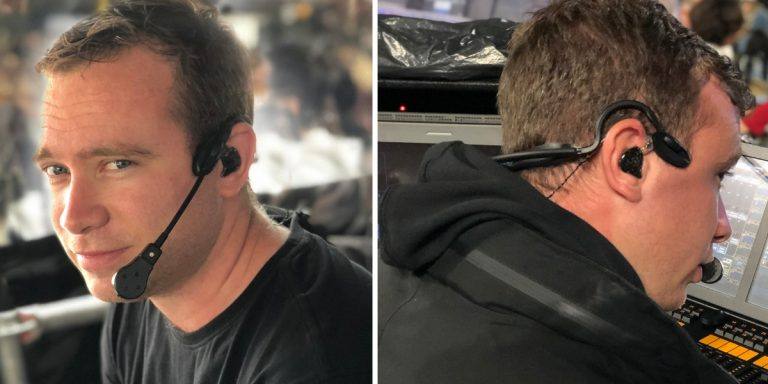 To accomplish the all-in-one audio plus comms headset, the feed from the Audio FOH mix is added to his Clear-Com FreeSpeak 2 body pack via a Fischer Amps In Ear Amp with an XLR to 3.5mm adapter. The amp itself has a volume control that can be adjusted to set the amount of show feed he wants into his in-ears.

The lighting director’s cueing comes from the structure of Sheeran’s songs, which are typically quite structured but Jones explains: “I need to be able to watch what Ed is doing because if something is to change in the set, being able to see him and keep up with him is important—something like a string could break and that means he is going to do another loop because everything is done live; there is no time code so it’s not like if something happens we just have to run with it.” Jones emphasized, “He will, you know, swap out a guitar if it breaks.”

The CM-i3 headset setup allows Jones to keep both eyes and ears on everything happening on-stage. The lighting is tied-in with the structure of the song—as is the live video and video clips; all the content is custom-made for the chorus, the verse, and the bridge. Everything is broken down into bits so it’s Jones’ role to ensure that they all fit in together. He pointed out that “My purpose for the show is to ensure that the show is looking consistent from one show to the next, and that means making sure that the spots are correct and the focus is balanced—that the show is as much the same today as it was when we first started back over 18 months ago.”

The modularity of the in-ears are critical for Jones to quickly remove one of his monitors and hear what the majority of the audience hears. Since there is a slight delay from when the audio is produced to when it reaches the audience, being able to monitor both helps keep his timing in synch with Sheeran and his movements on stage. The integrated comms feed directly through his in-ears also allows Jones to speak immediately to the crew backstage in addressing any technical issues mid-show. Similarly, others on the production team can cue Jones to changes in the set if Sheeran decides to change a song on his set list at the last minute. Jones now gets the cue directly through his headset instead of needing to listen for it on the radio as previous.

The CM-i3 headset was introduced to Jones by Point Source Audio’s UK distributor Autograph Sales & Installations who also had a major role in delivering other audio solutions for the Sheeran tour. While Jones says the CM-i3 is like wearing any other headset, a key difference is comfort: “It’s better than those headsets that squash down on your ears!”

The CM-i3/CM-i5 in-ear audio headsets are patented solutions for concert venues, front of house operations, lighting directors, stage managers, multimedia production, as well as camera operators. The in-ear headsets weigh a mere 1 – 2oz., and offer 12 dB off-axis noise rejection, replaceable / customizable earphones, and a kink-free cable design. A variety of headset adapters are available to take out the guess work for techs who want to own their own headset but never know which intercom system is waiting for them at the next venue. The headsets are sold standard with a single termination but the adapters let users switch between a variety of popular intercom systems such as Clear-Com, Telex, RTS, Reidel, and even intercom apps available on the iPhone and iPad.

More information about Point Source Audio can be found by visiting www.point-sourceaudio.com.

About 866 Productions
866 Production Services is based in Melbourne, Australia, and part of the 866 Group specializing in Lighting data networking and control systems. With over 8 years of Industry experience, owner and founder, Matt Jones, has provided specialized network, control and programming service for some of the most high- profile tours and events in the UK, Europe, America, Asia and Australia. With a focus on Lighting data networking and control, 866 Production Services provides a solution for networking, programming and control needs from the design stage of production up until the end of the last performance. www.866productions.com.au

About Point Source Audio
Point Source Audio (@PSA_audio) manufactures and distributes worldwide their SERIES8 and EMBRACE miniature microphones—a unique line of headset, earworn and earmounted microphones known for their robust bendable boom and waterproof features. The company also holds the patent for the world’s first modular in-ear comms headset that is supporting the hearing health for audio, lighting and camera techs using headsets everywhere from sports to space. As a result of PSA’s pro-audio expertise and its admired reputation for sales and service support, the company has also been named the North American distributor by audio networking companies Digigram and AuviTran. Founded in 2004, Point Source Audio is headquartered in Petaluma, Calif. For more information call (415) 226-1122 or visit www.point-sourceaudio.com. Follow the company on Twitter at www.twitter.com/PSA_audio

I needed control and it wasn't until I was introduced to the [CM-i3] headset that I found the perfect all-in-one solution.