While many pastors have little to no knowledge of production equipment, or at least not enough to have any specific brand preferences, Chase Oaks' Senior Pastor Jeff Jones was different. He had his own mic he had purchased years ago: a Point Source Audio CO-8WD headset condenser mic. Photo Credit: Elizabeth Evans Photography

Are you a church tech who oversees multiple campuses, or do you look after the AV production of multiple venues inside one campus? Ever wonder how to make your job easier and more streamlined? If you answered “yes,” Paul Mitchell, production technology director at Chase Oaks Church, has a plan.

“Standardization is big for me,” Mitchell says. “It helps us create consistency from campus to campus since we are one church with many campuses. This keeps the sound and visuals consistent, and volunteers can move between campuses and have a similar environment to work in. Standardization also helps our attendees experience Chase Oaks in a similar fashion at any of our campuses.”

Those campuses, in the Dallas suburbs, include Sloan Creek, Woodbridge, Richardson (a mobile campus), and Legacy, which is the broadcast campus and also the location of Chase Oaks’ Spanish services.

Standardization across them all? So what does that look like? Where do you start? Oddly enough, at Chase Oaks, it started with the pastor. 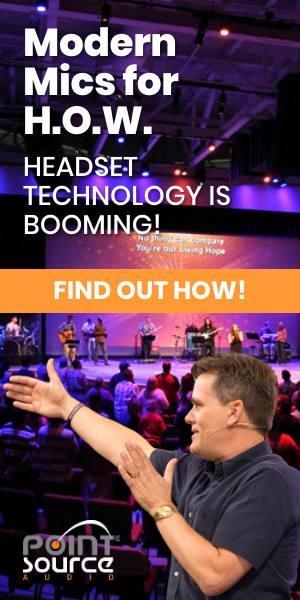 While many pastors have little to no knowledge of production equipment, or at least not enough to have any specific brand preferences, Mitchell found himself in a different situation. Chase Oaks Senior Pastor Jeff Jones had his own mic he had purchased years before, and he had grown to prefer it prior to hiring Mitchell.

The pastor’s CO-8WD headset condenser mic, built by Point Source Audio, sounded good, Mitchell found. But with standardization of equipment across venues and campuses as the end goal, could the manufacturer’s mics stand up to the job?

To find out, Mitchell brought in a range of microphones from several of the larger manufacturers and did a shoot-out that included Pastor Jeff’s Point Source Audio mic. In addition to sound quality, Mitchell and his team considered comfort, product durability, cost and availability of replacement parts, etc. “Considering the bang for the buck we just couldn’t justify the higher price tag of the larger competitors’ products,” he notes.

Point Source Audio says their booms are unbreakable, and Mitchell says that’s true. He has seen people take the single-ear version and straighten it out and then bend it back, and it still works. “You can’t break the headsets,” Mitchell notes. “The only thing we’ve ever had to service were the X connectors. All I do is make a phone call a Point Source rep, and they get them out to us ASAP. And they’re cheap, so I buy several at a time.”

Mitchell also has people use them during baptisms, sometimes well within the splash zone, and the IP 57 waterproof rating has proved invaluable.

At Chase Oaks, Pastor Jones recently upgraded to Point Source’s new CO2-8WD which offers dual microphones, with the second mic available as a redundant back-up if the signal from the first one fails or the second signal can be routed elsewhere. At Chase Oaks, the signal from one mic is fed clean to the main house PA since it can handle the wide dynamic range. The second microphone feed is lightly compressed and sent to the lobby, overflow and internet, where Chase Oaks averages a reach of 2,000 IP addresses each weekend.

In the end, Mitchell says, there’s a simple reason why the Chase Oaks team uses Point Source Audio mics: “They’re very reliable, you can’t break them, and they get the job done.”

Read More Articles Like This >> Visit Our SOUNDING BOARD