Point Source Audio’s on-ear EMBRACE microphones provided the perfect solution for production sound engineer Thomas Zaccheo to capture every detail for a documentary about the American Ballet Theatre’s (ABT) artistic director Kevin McKenzie who will retire from the role at the end of 2022 following three decades of leadership. The mics came into their own during the rehearsals for the summer season at The Metropolitan Museum where their unique mounting capabilities ensured the artistic director could instruct dancers in his normal style without needing to worry about miking.

Zaccheo chose EMBRACE microphones for this project based on McKenzie’s style during rehearsals. “Mr. McKenzie is a hands-on choreographer who will dance with the performers as a way of expressing his thoughts and ideas, as I was advised before the shoot,” explains Zaccheo. “There were discussions about what we could do to prevent any booming, given that three cameras would be present and, of course, clothing noise would be unavoidable.” Equally important as the sonic quality, the mic needed to complement the user:  “When I was packing up, Mr. McKenzie commented on how comfortable and inconspicuous the mount was, which he enjoyed because he didn’t want to be distracted from his directing.”

Zaccheo is well known for mixing across a variety of film genres, podcasts and post-production—delivering broadcast-ready sound with an emphasis on creating the director and writer’s vision, sonically.  The EMBRACE mics are a recent addition to Zaccheo’s sound kit, and proved to be the right solution to overcome this filming challenge. “Any sound engineer’s kit should have this item. These mics offer so much – I love the feature of being able to just pop out your connector and put something in just in case you want to use something else. They’re also the only mics I’ve seen where I can confidently say I don’t need to use bobby pins thanks to the EMBRACE earmounts.” 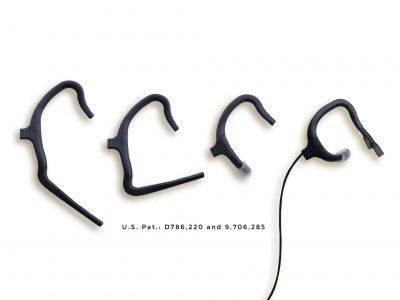 EMBRACE Microphones are engineered for concealing, but the mounting system keeps the mic placement consistent. This delivers the best of lightweight, low-profile lavaliers, combined with the consistent placement of on-ear microphones. “They not only worked really well, but they also never came loose and were incredibly quick and efficient when it came to mounting and demounting when we were finished,” reveals Zaccheo. “The microphone gave exceptional sound that I’ve been very happy with in comparison to other mics I’ve been using for the last decade or so. When Mr. McKenzie had to direct a rehearsal while wearing a mask, the Point Source Audio mic was able to recover any lost frequencies from the mask and sound natural and beautiful.”

Zaccheo is excited to have a new tool to help him overcome on-set filming challenges: “The EMBRACE is fantastic, and I’m thrilled to have them in my arsenal.”

When Mr. McKenzie had to direct a rehearsal while wearing a mask, the Point Source Audio mic was able to recover any lost frequencies from the mask and sound natural and beautiful.”