While live shows are already challenging, an open-air one further raises the stakes of making the best mic choice. Body-worn condenser microphones are miniature, yet the physical and acoustic demands on them are often considerable in a live production. Throw in a pandemic with distancing and sanitation requirements, and sound teams have a heap of hurdles to overcome.

These sound designers explain which wireless mics they chose and how they surmounted windy weather to the whir of airplane engines overhead in their recent outdoor productions. 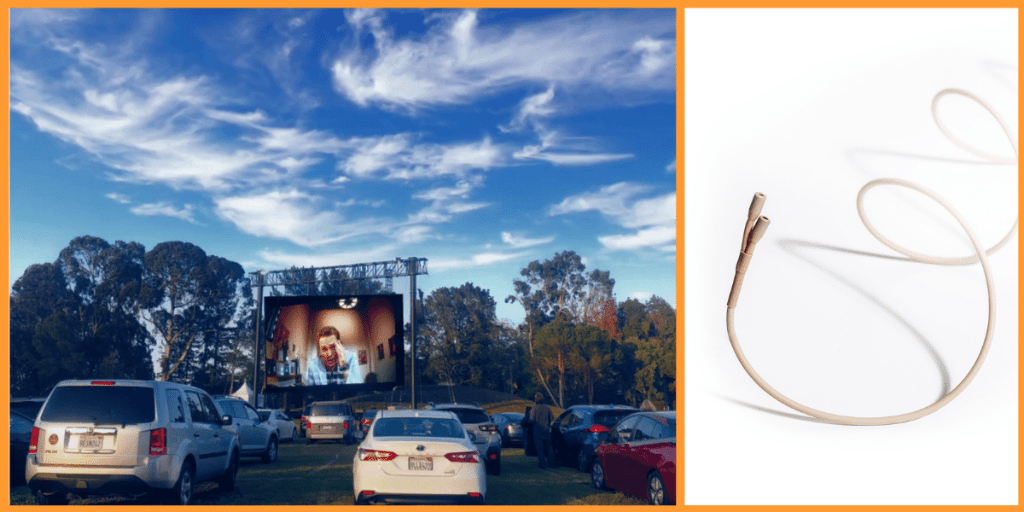 The San Francisco Opera presented its first drive-in opera, Rossini’s The Barber of Seville—and relied on the double mic setup of the CO2-8WLp lavalier microphone.  The SF Opera, who has worked with Point Source Audio microphones for years, opted to double mic given the unpredictable elements ranging from the windy weather to RF interference. Ziggy Tomich, SF Opera’s Assistant Master Audio Engineer, explained: “The PSA [dual element lavalier] mics were amazing. They held up to both the sweat and wind without worry—unlike the transmitters they were plugged into!”

Tomich stated further, “It was one of the most challenging RF environments we ever had to contend with, but the PSA [mics] were great. We especially loved having primary and backup mics in the same element. This show would have gone down in flames had we not been using backup mics on each performer, and the PSA dual element mic makes it much simpler to do so.” 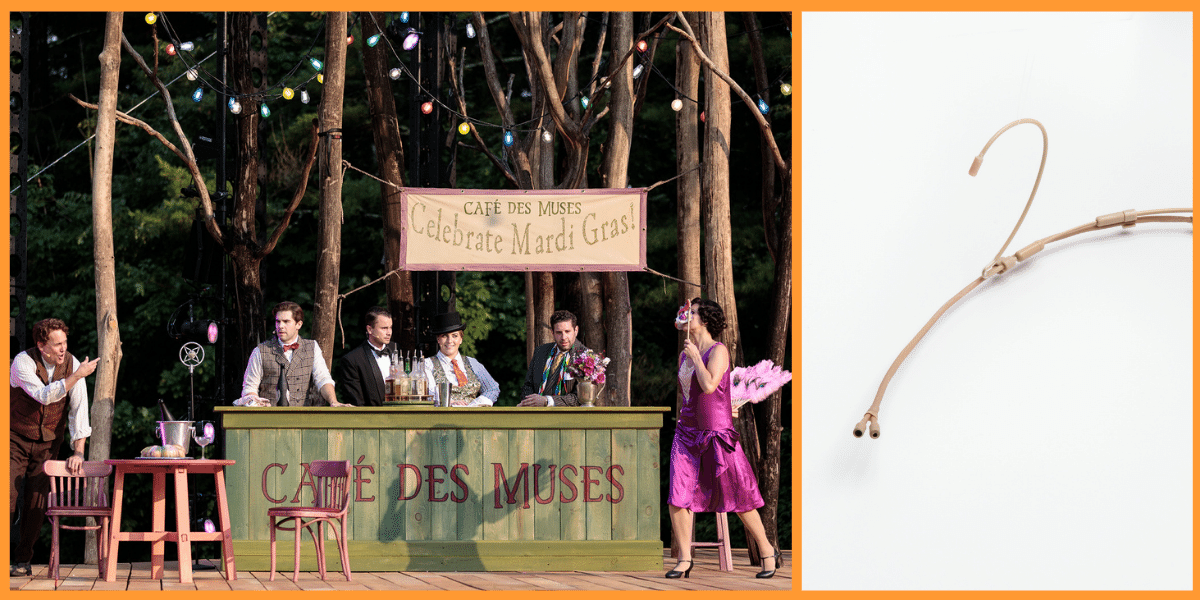 Live opera came back to the Glimmerglass Festival in Cooperstown, New York with a monthlong outdoor season in July.  Glimmerglass had to abandon its state of the art theater for an outdoor stage, and even torrential downpours couldn’t stop this “Songbird”! Sound designer for the production, Andrew Harper voiced his approval:  “The microphones sound absolutely phenomenal.” The microphone package consisted of Point Source Audio’s new GO2-8WD Dual Element Headset mics for the singers while the ensemble was outfitted with CO-8WD headset mics.

“We were able to place them exactly where we needed to get a really pure sound from each singer,” said Harper. “We have even performed in torrential downpours, and they were great.”

#3. EMBRACE Microphone for the Palm Beach Opera productions of La Bohème, The Magic Flute and Pagliacci 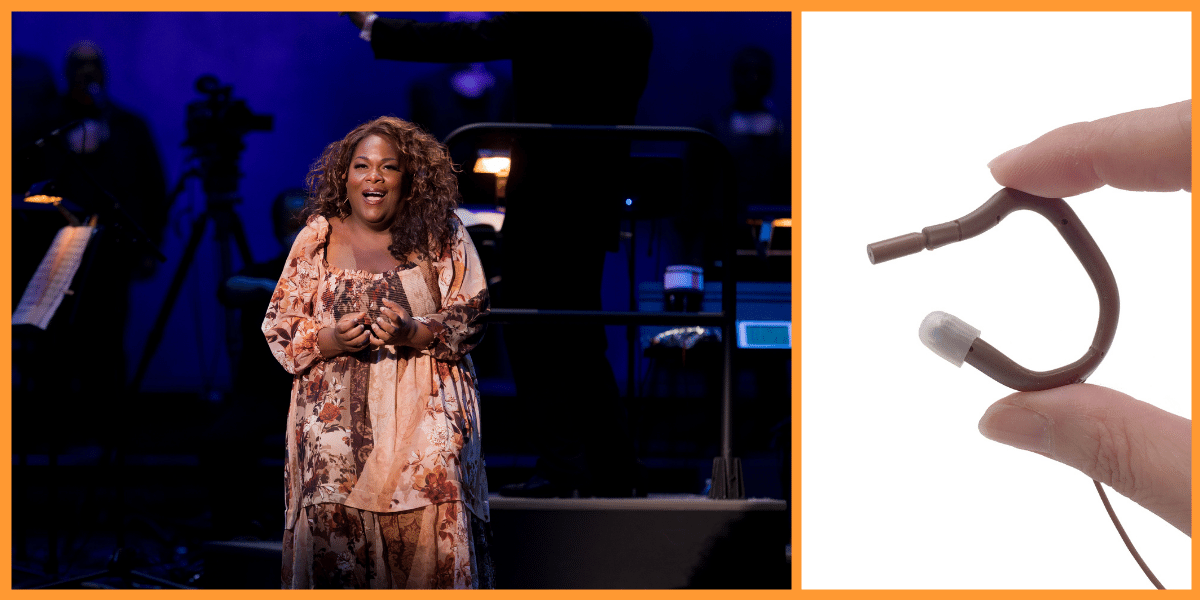 Sound designer Paul Bevan recalled his initial impressions of the EMBRACE microphone: “I was a little apprehensive because who would think a microphone sitting back on the ear is going to give you enough gain in what is basically an arena-sized venue with a huge PA system. But I knew right from the first note I heard that we weren’t going to have any problems. There was so much gain and it sounded so clear.”

The EMBRACE microphones played an important part in helping the company meet its COVID-19 protocols due to the ease with which the principal singers could SELF-MIC. “The audio technician would just hand them the pack and the mic, and then they would run it and put it on, and you didn’t have to worry about it being installed wrong,” added Palm Beach Opera’s Director of Production, Jeff Bruckerhoff. 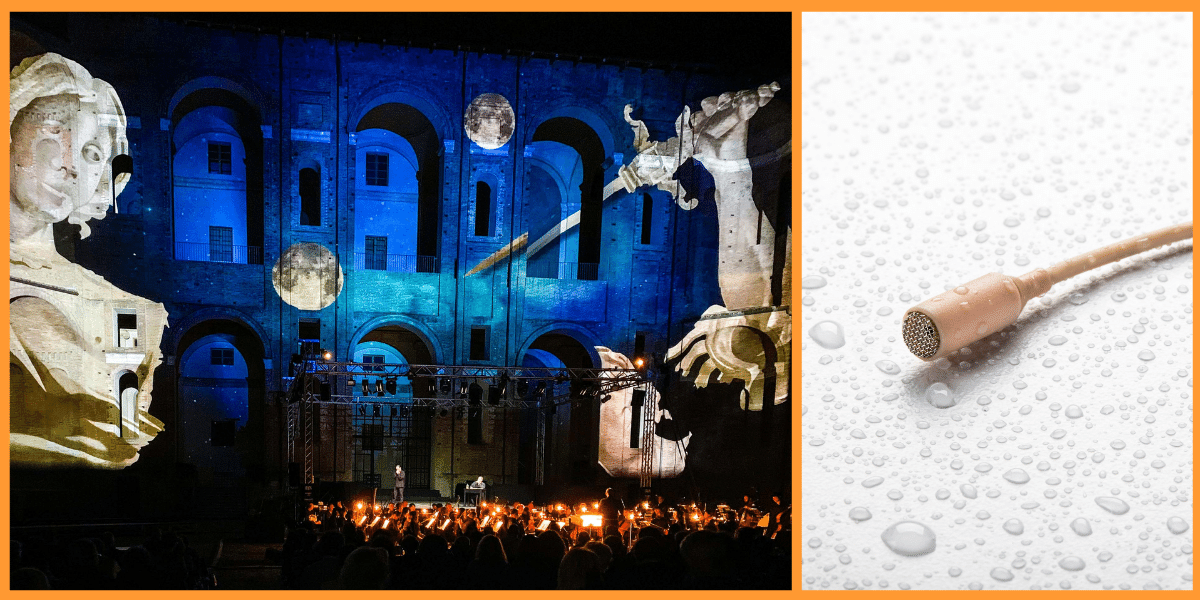 The CO-8WL waterproof lavalier microphone proved outstanding for sound designer Federico Bianchi and mixing engineer for the immersive production of Puccini’s Tosca, staged in the courtyard of Palazzo Farnese in Northern Italy’s city of Piacenza.

“The quality and the linearity of the sound is always first and foremost,” according to Bianchi. “I needed to make very few adjustments to the timbre of the microphones, which were already ‘flat’, and able to preserve all the dynamics and colors in the singers’ voices.”

Despite the omnidirectional characteristics of the microphones and the proximity of the monitors in some scenes, Bianchi discovered that whether the mics were placed on the forehead and on-ear, the “result was excellent right from the start.”

The lavalier microphone’s resistance to humidity, water, sweat and makeup withstood the shifting climate of the Summer afternoon heat to the high humidity in the evening. Throughout the rehearsals and the performances Bianchi stated: “The sound performance remained the same, proving the excellent qualities of the microphones. “

The CO-8WD waterproof headset worked out to be the right choice for Dallas Center Theatre’s production of Working: A Musical. “One of the things that stood out to me as well as my staff engineer was how good the headset microphones sound on female cast members or people with higher voice. It had this really nice fullness about it that a lot of microphones sometimes lack with people who have higher timbre voices,” explained Kyle Jensen, Assistant Head of Audio and Video for the Dallas Theater Center and sound designer for the production.

Another consideration for choosing the CO-8WD headset microphone was the production setting: Outdoors, in Texas, in the middle of July! According to Jensen, “We anticipated really hot temperatures and really high humidity levels, so being able to have something that stands up to that sort of abuse was very important.”

Additionally, considering the number of people likely coming in contact with the microphones, sanitization was crucial. Kyle wanted to make sure that the mics not only sound extremely good but could also withstand repeated alcohol swabs.  “Working: A Musical was such a cool show, honoring these people who deserve to be recognized, and the Point Source Audio microphones performed flawlessly throughout the run,” lauded Jensen.

How to Choose the Best Condenser Microphone

Wireless microphones range from small lavalier mics used to conceal on-ear to double-ear headset microphones that are a solid staple for productions large and small. If you’re looking for a miniature condenser microphone for performance, you must consider:

Schedule a LIVE PRODUCT DEMO to explore our solutions.